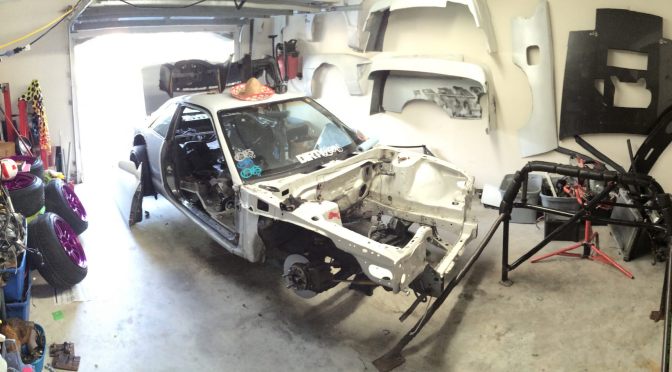 Lets get things started with a quick little recap of previous events. This site, and a few other “build threads” from back when I frequented internet forums, is built off of a car I purchased in February of 2005. It catapulted me into the ridiculous sport that is known as drifting. I was still in highschool, about to graduate, and every one of my friends had Honda Civics, Integras…. stuff like that. I had stumbled upon the 240sx and, subsequently, drifting. I don’t know about anyone else, or what they think about the sport, but once I discovered the “drifting” world/community…. my life was completely changed. Drifting had been around for a few years by the time I found it, but it was still a relatively new sport in the US back in 2003/2004 when I had really started to look at these cars.

I made the purchase through a local drifting forum called D-Town which is pretty much dormant nowadays. It took me a couple summers to get the car to where I wanted it, but once it was running, I drove it through college and countless events across the country. From the midwest states of Minnesota and South Dakota, to southern Arizona and eastern Florida. It allowed me to meet some of the coolest people on the planet and I can truly say I have a set of life-long friends in each of those states. As a matter of fact, most of these people I would not know today if I hadn’t started drifting.

Now, getting to the point of this post. As it turns out, there is a circle of life for all things. It seems that most cars snatched up by teenagers learning how to drift somehow end up killing the car within the first year or two. I guess I could consider myself luck it lasted close to 8 years.

Anyways, this car no longer exists…. here’s how it happened:

While driving a local grassroots event at Three Palms Speedway in Punta Gorda, FL, my rear tire de-laminated coming off the bank. I could feel the vibration from a flap on the tire, but didn’t really think much of it. The tires were high performance tires of a quality brand that were given to me as used tires, very similar to tires I’d used at numerous other events. They were still extremely healthy looking and I had only done a single lap on them beforehand. I was in disbelieve they could be shredding so fast so I decided to stay in it (bad move). Anyways, I came off the bank, transitioned onto the straight (the car felt pretty loose) and transitioned again back into the opposing bank….spinning right into a wall.

I was really lucky that the wall was lined with monster truck tires as I came in pretty hot. My passenger and I were fine and we let the track crew check us out quick before we dragged the car off the track back to the pits. Going back to that drifting community I was talking about earlier. It’s pretty amazing how fast all of my friends rounded up a truck and trailer for me to load it onto. I honestly hadn’t even thought about how I was going to get it home before my buddy walked up and told me he was going to go get his friends trailer to tow it home and he’d be right back. It was way cool how everyone rallied together to help me out… especially since I really had only met these guys 2 or 3 times since living in Florida. #grassrootsforlife

Here are some pictures of the car and a video of the crash. Oh well, all good things come to an end! 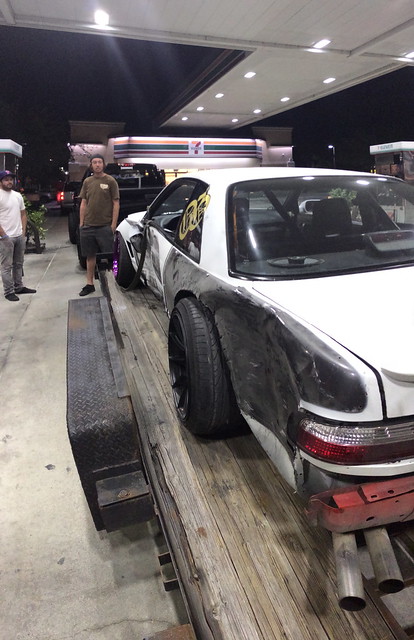 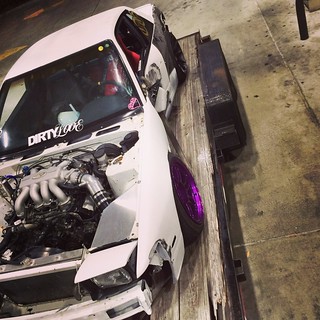 So, with that being said, it was time to strip this glorious chariot of all it’s guts and glory. My faithful steed, it’s time to put you to rest. 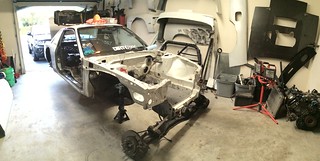 As with any twisted chassis, proper steps for destruction MUST include a sawzall. These cars really are pop cans. It probably took me a total of 45 minutes cutting time to get this thing from chassis to pile of garbage. Goodbye. 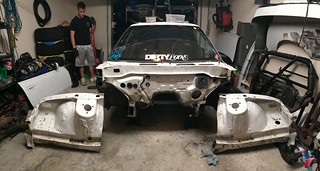 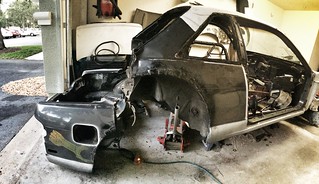 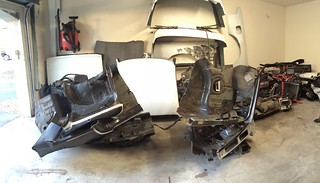 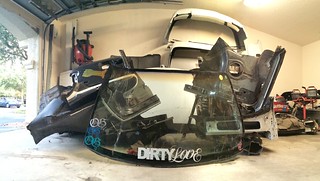 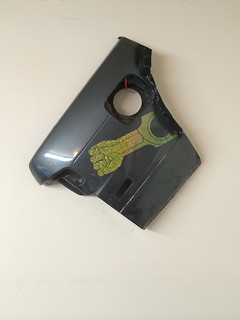 In the next installment, I will finally start talking about the new car. Yes, a new car….. House Of The 450sx v2.0!!  Plans were originally to salvage everything off this car, minus the chassis, and transfer everything over to the new one. However, in my infinite wisdom, took this opportunity to somehow let it snowball out of control and build what I have envisioned for years. Below are a few shots of the new chassis. She sure looks like a pile now, but this thing will be a gem when finished. 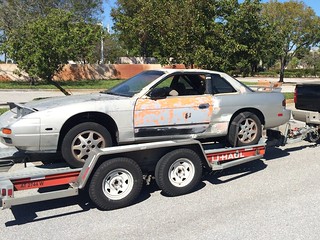 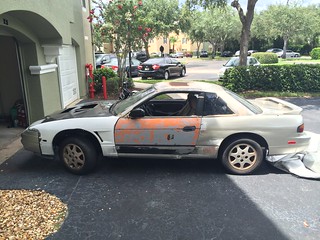 After being here for a couple months I’ve begun to get a serious itch for drifting.  It had been quite a while since I’ve driven and started asking around what there was.  I always knew about the drag and drifts up in Phoenix and will definitely need to check one of those out.  There is also a nice circuit a few hours away in New Mexico called Arroyo Seco Raceway that I will definitely need to check out as well.  But what about Tucson?  Turns out there is nothing.  SOOoooo…. I’m going to make this happen.  There is a sweet karting circuit just south of Tucson called P1 kart circuit and is meant to be a replica of the Suzuka Circuit in Japan, rad!  I talked to the owner and went out to check the course out during a NASA time attack event.  They ended up putting me in my own session so i basically got the entire track to myself for 4 15-20min sessions.  Putting it simply, this track is awesome. Super technical, very easy on tires, and the location is great!

I’m working on getting some events held out there in the coming months.  Tentatively I have scheduled an event on September 29th from 5-10.  Get at me if you are interested! Basic info is below as well as a video of me on the circuit to give you an idea of the track!

Come out and have some fun with me and help get this going, I’d love to meet you all!

This is going to be classified as a FUN DAY! We had talked about turning it into maybe a mini series/circuit but for now I think it’s smart to keep it a chell/fun day.

With this being the first drift event that has been held out there since’08 there may be one session of time attack drivers to help offset the cost of the event as we are unsure of how many drivers we are going to get.  This is a factor of it being a new event, me having just moved here and not knowing everyone in the community, etc.  Ti will be a blast regardless with tons of track time!  When I was the one session out of 4 at the time attack event I got over 30 runs in!

We will be allowed to drift from corners 3 to 10, the most fun and technical part of the track!

Be sure to contact me if you have any questions or want to pay and reserve a spot.  If you are a sponsor and looking to help out with the event let me know, I’m sure we could work something out!

Last weekend we held the first SD-Drift event of the year out in Sturgis, SD, it was an absolute blast!  Cool dudes and nothing but tandem practice and drifting all day long makes a rad time.  Here’s some media from the events.  All pictures in this update come via FOTOmotive, check em out here!

Now on to the video and pics!  Driving was pretty sloppy, as to be expected after not driving for several months.

In love with this picture.

LOL, got too close in tandem.

I suck at updating this blog… ha.  But guess what, last drift event of the SD-Drift season is next week (October 2nd) at the Thunderdome in Sturgis, SD; it’s right across the street from the Full Throttle Saloon in Sturgis.  Be there!  It’s an absolute blast to watch/participate in.

Driving starts at 9am and we go till 5pm.
Spectators – FREE
Drivers – $60 – cap of 25 drivers – Prepay is NOT mandatory this time. You can pay all the way up until October 2nd.

Need more info?  Get at me!

SO just this past Sunday we (SDDA) had our second event of the summer. It was at the Monkey Rock/Kick Start in Sturgis, SD.  The location was AWESOME as we could get some serious long sliding/early entry going on. Here’s one video I’ve uploaded of the 6 hour event.  It was an absolute blast even though the weather (rain) was off and on all day.  I’ll update this here with more pictures and video as they come up!

It’s kind of strange that I finally got to drift with people on D-Town for the first time last weekend; the drift forum I’ve belonged to the longest, bought this car off of, started my first build on, and even went and hung out at some drift events YEARS ago. Needless to say it was a GREAT time for me, and about time too. It was my first time at a real track as all we have out in good ole SD is parking lot events. Don’t get me wrong those are fun as well because you can switch up the track layout constantly.. but the event at Elko Speedway in Elko, MN last weekend was one of the most fun events I’ve done.

That 3rd gear bank had me nervous all day as I hadn’t driven my car at an event in nearly 10 or 11 months… it took me a couple runs on the inner oval to get re-acquainted with my car. I spun out all over the place the first run and looked like a moron. Next couple runs were a lot better but I still think i could have done better. When I finally decided to take on the bank, it was on. That bank is so much fun, first time doing 3rd gear for me and man it was fun. I cannot wait to go back there again! On with the media.

1st attempt at 3rd gear ever.  Was feeling out the bank for the first few corners until i got comfortable. Waaaaaay too much fun.

Drift event is coming up this weekend (Sunday to be exact), hopefully i can get someone to lend me their car so i can go drifting!

Here are quite a few more pictures Mathew Zick took at Midwest Drift Union Round 1 at the Sportsdrome Speedway in Jeffersonville, IN. This guy has taken all of these from BEHIND A FENCE can you believe that?


Get this guy a media pass and i guarantee you will see awesome things in the future!

Even more can be found at his flickr at http://www.flickr.com/photos/jst1cam/

On with the photos.

Event was super fun. Started out being cold and wet as it was raining off and on throughout most of the day. Eventually towards the end it dried out quite nicely and thats when the REAL fun began. Here’s some video’s and pictures from the day.