Was driving last friday night and was about to get on an on-ramp. Road wasnt lit well at all and was going too fast (which was like 20-30 mph, it was a 90degree turn so yeah, dont need to be going that fast to be going tooo fast). The corner i had never taken was way sharper than i thought it was and got the car a lil sideways and ended up being to fast and slammed right into an island i didnt really see. Something stupid that could have been avoided if i stuck to the rule – stay at teh track. Whatever everyone has their moment. So here are some carnage pictures.

Here is the ‘new’ oil pan. Its the one that originally came with the engine but the genius’s at the junk yard blew a hole in it with their torch when they cut the lower transmission brace. Anyways, i had to put a big metal band-aid over the hole. 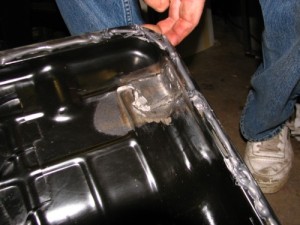 I somehow managed to change the oil pan with the engine still in the car. We raised the engine up a little bit so i could drop the pan an inch or so, just barely enough to where i was able to squeeze my fingers in there and unbolt the bolts holding the pickup tube on. Thank god they were situated where i could get at them easily.

Also, if you look at the last pic closely you can see how mangled my headers are from the contact with the curb. Tubing is designed to hold exhaust gases and direct them, not stop a curb. So what does it do? deform like crazy.

Today is my birthday btw for anyone who cares. 21!